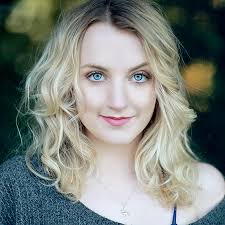 Evanna Patricia Lynch[1] (born 16 August 1991) is an Irish actress and model. She rose to prominence for her portrayal of Luna Lovegood in the Harry Potter film series, appearing in four films and their tie-in video games. She has made fashion accessories and recorded an audiobook of Foster by Claire Keegan. She has also appeared in photo shoots for various magazines, and modelled for Katrin Thomas and Ciaran Sweeney
Early life
Lynch was born in Termonfeckin, County Louth, the daughter of Marguerite and Donal Lynch.[2] She has two older sisters, Emily and Mairead, and one younger brother, Patrick.[3] As a child, Lynch read the Harry Potter series and became a fan,[4][5] sending letters to the author, J. K. Rowling.[6] She attended Cartown National School in Termonfeckin until June 2004, and then moved to Our Lady's College in Drogheda,[2][4] where her father was the deputy principal.[7][8] In 2008, Lynch studied speculative fiction and drama at the Centre for the Talented Youth of Ireland, a summer school for gifted teens, in Glasnevin.[9][10] While on the Harry Potter set, she was tutored for at least three hours a day.[11] From September 2010, Lynch attended the Institute of Education to repeat her Leaving Certificate.
Career
Harry Potter
Evanna Lynch credits her being cast in the Harry Potter films to the obsession she had with the Harry Potter book series. At age 11, during the release of the fifth book in 2003, she was hospitalized and her family consulted with the book's publisher and the hospital and Lynch was allowed to leave for an hour and collect a signed copy of the book.[13] While some have stated that her prior relationship with J. K. Rowling (a strictly epistolary relationship) was the reasoning behind the casting decision, this theory has been debunked by both Lynch and Rowling, confirming that Rowling was unaware of Lynch being cast in the role of Luna Lovegood until the producers mentioned Lynch’s name.[14] Lynch got the role by reading about the casting call on one of the many Harry Potter fan sites and going to the open audition. In 2006, Lynch auditioned at a casting call in London for the role of Luna Lovegood in Harry Potter and the Order of the Phoenix, the fifth film in the series adapted from the books.[15][16] After auditioning against 15,000 other girls,[15] and a subsequent screen test with lead actor Daniel Radcliffe, she was cast at the age of 14.[11] Producers were impressed with her affinity for the character; David Heyman said "The others could play Luna; Evanna Lynch is Luna."[17] Although uninvolved in the casting process, Rowling believed that Lynch was perfect for the role.[18] She had never acted professionally before the Harry Potter series, her experience limited to school plays.[19] Harry Potter and the Order of the Phoenix was Lynch's debut screen performance in 2007. The film was a box office hit, taking US$938 million worldwide, and garnered generally favourable reviews.[20][21] Critics praised the performances of the supporting cast, often singling out Lynch for particular acclaim; A. O. Scott of The New York Times called her performance "spellbinding",[22] and Jane Watkins of Country Life said she "[brought] an appealing sweetness to her character that's not so developed in the book".[23] She reprised her role as Luna in the film's tie-in video game.[24]

Two years later, Lynch again starred as Luna in Harry Potter and the Half-Blood Prince, the sixth installment in the series. The film was critically and financially successful.[25][26] Wesley Morris of The Boston Globe wrote that Lynch as Luna "combats the movie's occasional sluggishness with a hilarious sluggishness of her own",[27] and Michael Dwyer of The Irish Times called her the best Irish actress of 2009 for her work on the film.[28] Her performance earned her Scream Award and Young Artist Award nominations,[29][30] and she reprised her role in the film's tie-in video game.[31]

Harry Potter and the Deathly Hallows – Part 1, the first of two films adapted from the seventh and final Harry Potter book, was released in 2010. The film was a success at the box office and drew generally favourable reviews from critics.[32][33] James Verniere of The Boston Herald commented that Luna "is still delightfully lunar,"[34] while Simon Miraudo of Quickflix criticised the film commenting that "the delightful Evanna Lynch is brutally underutilised as the loopy Luna Lovegood".[35] She reprised her role in the film's tie-in video game.[36]

Lynch again appeared as Luna in the eighth and final instalment in the series, Harry Potter and the Deathly Hallows – Part 2. The film opened to critical acclaim and went on to become the fourth highest-grossing film of all time, grossing US$1.328 billion in box-office receipts worldwide.[37][38] Moira Macdonald of The Seattle Times wrote that Lynch "continues to be all-that-and-a-radish-earring as the ever-wafting Luna Lovegood,"[39] and Roger Moore of The Orlando Sentinel named her as "maybe" one of his "favorite players in the finale."[40] She again reprised her role in the film's tie-in video game.[41] In August 2012 at Leakycon in Chicago she joined the cast of StarKid to play Luna Lovegood in a script reading of the third Harry Potter parody musical, A Very Potter Senior Year (the other two being A Very Potter Musical and A Very Potter Sequel.)

The author of the Harry Potter series, J.K. Rowling, gave a speech during the world premiere of Harry Potter and the Deathly Hallows Part 2 on 7 July 2011 in London, England. She stated that there were seven major cast members in the series, whom she referred to as The Big Seven, and she named Lynch as one of the seven members, along with Daniel Radcliffe, Rupert Grint, Emma Watson, Tom Felton, Matthew Lewis, and Bonnie Wright.[42] Rowling has said that, of all the actors in the film series, Lynch has had the most influence on how her character was subsequently written. In 2012, she told Charlie Rose that when composing the final books, "I saw her. [She] got in my head. I even heard her voice when I was writing Luna.
Further career
Lynch went on to guest star as Princess Alehna (daughter of Taryn, played by Orla Brady) in the first season finale of the Sky1 television series Sinbad.[44][45]

She was also scheduled to play Fiona Carrick-Smith in the 2013 indie crime drama film Monster Butler. The film was to have been based on the life of British serial killer and thief Archibald Hall.[44][46] The film was cancelled due to problems with funding. Lynch also starred in indie teen comedy G.B.F., which screened at the Tribeca Film Festival in New York in April 2013 and at the Frameline Film Festival in San Francisco on 30 June 2013.

In May 2013, it was announced that Lynch will be starring in the British stage tour production call Houdini performing at various theatres in the United Kingdom from 9 September 2013 to 12 October 2013. Lynch will play the role of Bess Houdini, the wife and assistant of the famous magician Harry Houdini.[47]

In December 2013, it was announced that Lynch would play Theresa Bornstein in the independent crime thriller Dynamite: A Cautionary Tale. Filming for the production is taking place in New York City and set to be filmed for eighteen days.
Other work
Lynch has used the fame that she has achieved from her role in the films as a way to promote healthy self-esteem and body image in young girls because of her previous experiences with the disorder anorexia nervosa. From the age of 11 Lynch was in and out of rehabilitation clinics for 2 years. She soon found a connection with the character of Luna Lovegood from the Harry Potter book series and was inspired by the character’s embracing of her own oddities. Lynch wrote an essay entitled “Why the Body Bind is My Nightmare”[49] in which she describes her emotional struggle with her appearance and how she managed to overcome this through the use of allusions that pertain to the Harry Potter series.

Lynch has made and helped design a number of fashion accessories for the Harry Potter films.[8][50][51][52] She has modelled for Katrin Thomas and Ciaran Sweeney,[53][54][55] and in 2012 appeared on the cover of the Fall issue of Runway magazine.[56] She has also recorded an abridged audiobook version of Claire Keegan's short story Foster.[57] Her charity work includes participation with the Multiple Sclerosis Society of Ireland, in which she launched their MS Readathon fundraiser in 2010.[58] Lynch is also a member of the Board of Advisors for the non-profit organisation, the Harry Potter Alliance (HPA). With the HPA, she has supported same-sex marriage in Maine,[59] taken part in a webcast fundraiser,[60] written an article about body image, and contributed to a fundraising book.
Filmography